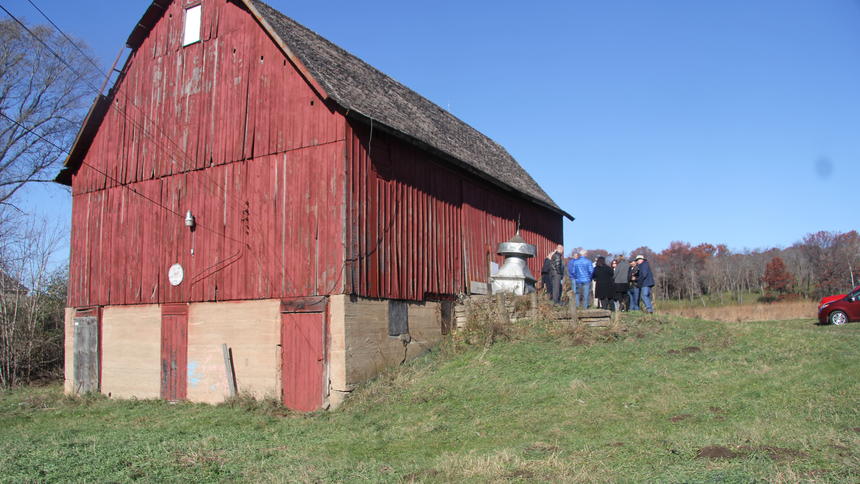 Local lawmakers and preservationists gathered Nov. 8 at the Miller Barn in Woodbury to celebrate a $160,000 state grant that will pay for the restoration of the nearly century-old structure.

The money was appropriated from the state arts and cultural heritage fund through the efforts of State Sen. Susan Kent, DFL-Woodbury, and state Reps. Kelly Fenton, R-Woodbury, and JoAnn Ward, DFL-Woodbury. The Woodbury Heritage Society will use the funds to replace the roof, paint and repair the siding and to install a new metal cupola on the roof.

"It's about preserving a small piece of history," Fenton said.

She credited Woodbury businessman Jack Lanners for arranging a meet with members of the Heritage Society. Lanners died Nov. 9.

The barn was constructed between 1921-22 for dairy farmer August Miller. Located on public land near Settlers Ridge Parkway and Valley Creek Road, it's one of the few remaining vestiges of the city's agrarian roots. The farmstead itself dates back to 1850, not long after the first settlers moved into Woodbury.

Housing developments have leapfrogged across the once rural area, erasing farms and fields.

Retired farmer and Heritage Society president Wayne Schilling, whose ancestors came to Woodbury in 1856, said he hoped the Miller Barn could serve as an education destination where children could learn about the crucial role farmers play in the food chain.

"The young children have lost touch with where the food comes from," Schilling said. "They think their chickens are coming from Cub (Foods)."

They recently launched a three-year $500,000 capital campaign to develop the site into a park. Plans call for a visitor center, a demonstration field, and amphitheater for historic presentations.

But Dick Hanson, who toured the barn with others last week, said the state's legacy grant could mark a turning point. Hanson is a member of the Woodbury Community Foundation, which is working with the society on the project.

"The significance of the legacy fund grant is that it gets it started," Hanson said. "They have raised money on a very small scale, person-to-person basis. They were really having difficulty getting much traction with it. The fact that this happened is a huge boost."

"It's been a journey to even get this far," Woodbury Heritage Society Board Director Margaret Wachholz said. She added that she wished local historian and philanthropist Inez Oehlke could have been there to share in the moment. Oehlke advocated for the preservation of the Miller Barn and wanted to leave it as her legacy before she died September 2016.

If you’re thinking of buying or selling a home, you can also support the effort to preserve the Miller Barn. Learn how here!